TARA members and retirees who are attending the Texas AFL-CIO Convention at the Hyatt Riverwalk in San Antonio this week on July 25-27 are invited to the TARA Caucus Meeting at 4 pm on Thursday, July 25, after the end of the day’s convention activities. We will meet in the Regency 5 Room from 4-6 pm. You do not need to need to be a TARA member to attend.

TARA HOUSTON President Cheryl Anderson is also the Chair of the Texas AFT Retiree Plus Committee which met recently in San Antonio to celebrate victories and plan for future work. Many committee  members are also part of TARA chapters in Dallas, Houston, San Antonio and Corpus Christi, plus several at-large members. TARA has a close partnership with Texas AFT to work on all issues affecting retirees.
The Teacher Retirement System of Texas Board of Trustees met this week and approved the disbursement of the supplemental pension payment—the so-called “13th check,” which was approved by the Legislature this spring as part of Senate Bill 12—for as early as September, with the official time frame termed “early fall.”
The one-time supplemental check will be the regular pension payment amount for all those who retired before December 31, 2018, but it’s capped at a maximum of $2,000.  Education retirees have gone almost 15 years with no COLA and only one 13th check in 2007. The September disbursement is good news for many retirees who are still facing the significantly higher deductibles and added health-care costs for TRS-Care that spiked in 2017.
Retiree Plus/TARA members were instrumental in getting the good provisions of SB 12 passed, including the increases in contribution rates to the pension fund that will make a true cost-of-living increase possible in the 2021 legislative session. The Retiree Plus/TARA members worked hard to educate legislators—with letter campaigns, visits with lawmakers and press conferences—on the dire need for a COLA. It was noted and plans made,that much still needs to be done to address the significant increases in TRS health-care costs.

The TARA Austin Chapter met recently and heard two speakers who are at the forefront of the fight for immigrant rights. Kate Lincoln-Goldfinch, pictured below,  is an Austin-based attorney whose work focuses on providing legal services for refugees and immigrants. She also volunteers for RAICES, traveling to detention centers to help prepare asylum seekers for their credible fear interviews. They also heard Robert Painter, pictured below, Managing Attorney with American Gateways. This is a nonprofit that provides immigration legal services as well as legal orientation, immigration workshops, and pro bono legal representation at immigrant detention facilities.
As always, the chapter heard music from President Jack McCabe and verse from World Poet Thom. The members continued their tradition of bringing delicious food to share at the potluck before the meeting. 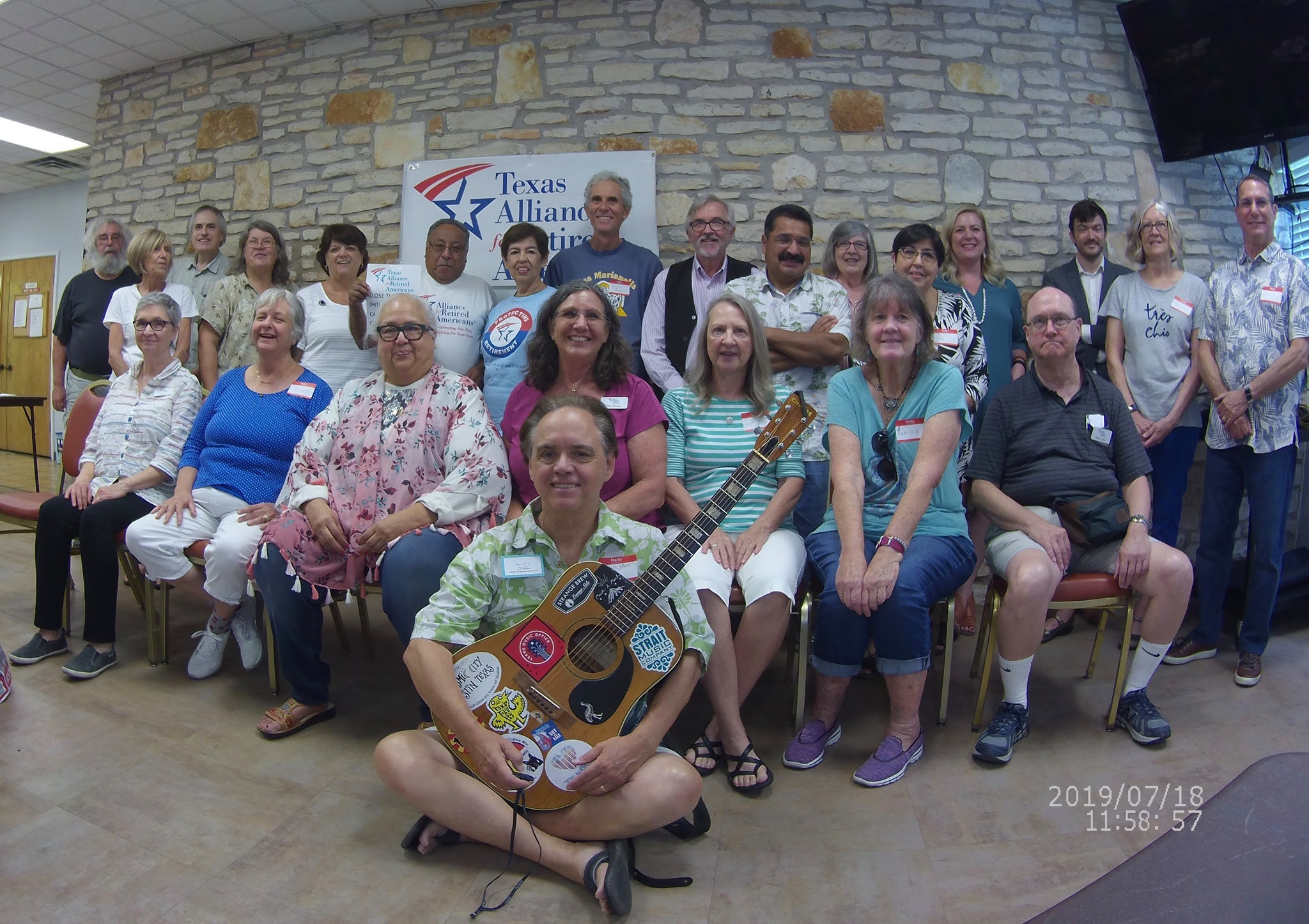