We in TARA hope that you and your families have a very Happy 4th of July! All TARA members and retirees who are attending the Texas AFL-CIO Convention in San Antonio on July 25-27 are invited to the TARA Caucus Meeting at 4 pm on Thursday, July 25, after the end of the day’s convention activities. TARA President Tony Padilla says, “We hope to see all retirees and those interested in preserving retirement at the TARA Caucus.” We will also have a TARA exhibit table at the convention.

SPEAK OUT FOR VOTING RIGHTS!

TARA Field Organizer Judy Bryant and Dallas Activists Zen Biasco, Morris Fried and Ken Williams joined Clean Elections Texas, led by Liz Wally and Dave Jones, to hold a rally in front of Senator John Cornyn’s office to show their support for the Voting Rights Advancement Act of 2019. They then went to Sen. Cornyn’s office to meet with an aide and deliver a letter urging his support for the VRAA and to implore the Senate to bring it forward for a vote as soon as possible. 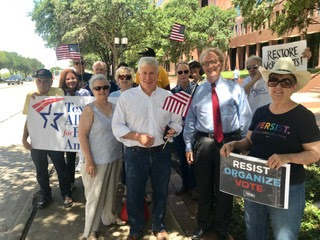 TARA President Tony Padilla was a speaker at the Action for Voting Rights Rally and demonstration held at Austin City Hall on June 25th. He joined 52 people who attended and represented a large number of groups such as Public Citizen, Black Austin Democrats, Move On, Declaration for American Democracy and LULAC. They turned out to speak about protecting and restoring voter rights on this national Day of Action. Staff members of Congressman Lloyd Doggett and many Travis County elected officials also joined the rally.

TARA activists Rose Brown, Paul Brown, Mary Scott and Horace Blake joined Field Organizer Judy Bryant to assist at the AFL-CIO Citizenship Clinic held at the CWA Hall. The clinics, which have been held around the state the past year at no charge, help valid eligible green card holders to complete all the Citizenship paperwork correctly and provide volunteer immigration attorneys to check it. This makes completing the steps to become a citizen much easier and more affordable. Many participants expressed thanks to the AFL-CIO for this “one stop shop” where they got so much help for free.
Texas AFL-CIO Citizenship Coordinator Jesus Perales, Secretary Treasurer Montserrat Garibay, Communications Director Ed Sills, Director of Field Education and Research Joe Arabie and Digital Communications Director Mark Maldonado all came from Austin for the clinic. Dallas AFL-CIO Political Director Lorraine Montemayor organized local arrangements and volunteers.