The Golden Triangle, Fort Worth and Austin TARA chapters meet this week. If you live in these areas, you will receive a separate email about the meeting.

TARA President Tony Padilla and retirees from the Machinist Union attended the TCU-IAM Legislative Conference in Washington, DC from May 5 to May 9, 2019. Members lobbied Congress on retiree issues such as  Social Security, Medicare and Medicaid, pensions, and Railroad Retirement. They also talked with Congresspersons about airline issues, right to work, healthcare and many other labor issues. President Padilla is shown below with Mary Sansom of the IAMAW on the left and NARVRE President Tom Dwyer on the right. 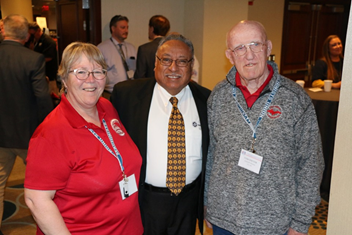 Judy Bryant, Field Organizer for TARA, was scheduled to be the presenter at Coastal Bend Retirees’ Thursday meeting; however, the bad weather in the Dallas and Waco areas prevented her safe travel, so we advised her to stay home. Elaine Jones, Coastal Bend Retiree member and Texas ARA Executive Board Member as VP representing AFT, was drafted to take her place.

All the ARA Older American Month handouts were distributed. As she herself read the Power Point presentation and handouts in preparation for the meeting, Elaine realized that there were terms used that she didn’t understand and yet were in the literature as if we all understood them. She decided to stress these terms in her presentation for the audience to better understand the broader concepts. Terms explained included CPI-U, CPI-W, CPI-E, NAFTA, and Means-Testing. She also emphasized Medicare for All in more detail since it’s become a political hot topic for the 2020 election. Of course, other topics were covered, but members seemed to appreciate having a more thorough understanding of those basic concepts.

On Mother’s Day, Coastal Bend Retirees’ members Becky Moeller, former President of Texas AFL-CIO and co-organizer of this event, and Elaine Jones participated in a rally for children and families seeking asylum. They were joined by Becky’s granddaughters Taylor and Taren Veit. Mothers Against Kidnapping is a coalition of concerned groups and individuals who are worried on this special Mother’s Day about the numbers of mothers and children who are kept separated by our government. Becky refers to this effort as a coalition of coalitions, because the groups include labor organizations, retiree organizations, Raices, and other organizations in South Texas.

Their main emphasis right now is collecting shoelaces. As U.S. customs and Border patrol encounter people seeking asylum and other refugees, they remove the laces from their shoes and the detainees must spend the remainder of the incarceration stumbling around on untied shoes. Even when they are finally released to one place or another, the shoelaces are not replaced. We are collecting shoelaces so that organizations in the Valley can give them laces for their shoes.

Communitea, located in Water Street Village at 505 S. Water St., Ste 501A, Corpus Christi, is the drop off point, Tuesday-Saturday, noon-6:00 PM. If you have a load to be picked up, contact Julie Rogers at 361-461-1967 or rogersjuliet@gmail.com. This is a great opportunity for your family, group, organization or church to help. The donations will be delivered to Good Neighbor Settlement House in Brownsville, Loaves of Fishes in Harlingen, and Catholic Charities in McAllen. The project will continue through Father’s Day.