THE US MAIL IS NOT FOR SALE!

TARA Secretary Gene Lantz, Field Organizer Judy Bryant and super activist Eddie Morganjoined members and retirees of APWU Local 732 in front of the main Dallas post office for their Tax Day of Action. Members wore shirts saying “The US Mail Is Not For Sale” and passed out leaflets showing how the postal service receives zero tax dollars and pays for itself. TARA supports our APWU brothers and sisters. 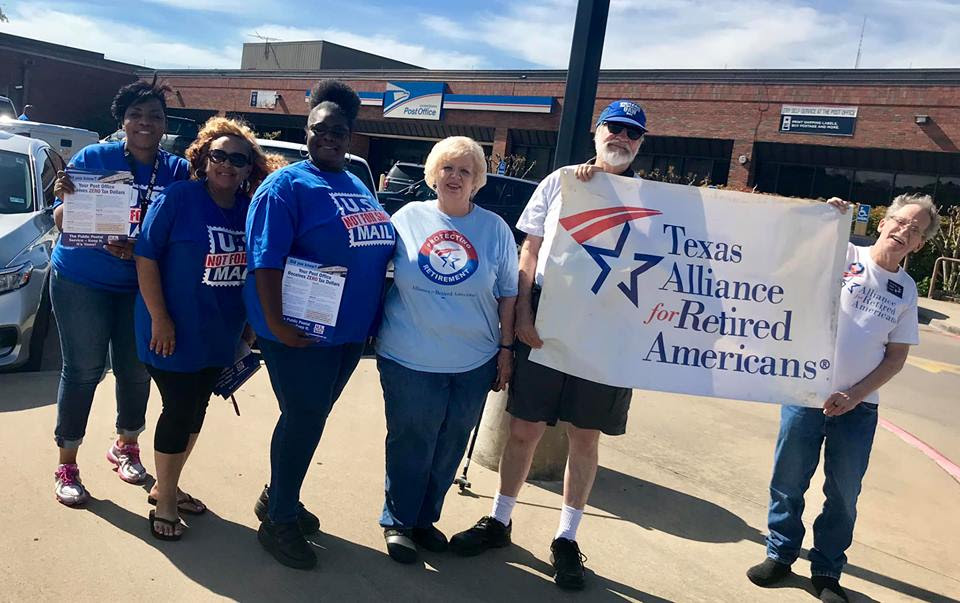 State Representative Abel Herrero, District 34, was in Corpus Christi for a few hours on April 11, and spent time with the TARA Coastal Bend Retirees. His overall theme was “Voting is the strongest power you have.” He expressed his pleasure that he can see the difference in attitude that the 2018 election made in the House and that it is a much more pleasant session. Whenever anyone asked what they can do to help, phone calls and emails help, he said, but nothing will be more powerful than our votes and helping to get more people to vote. When Rep. Herrero announced that the time has almost run out to present bills, everyone was shocked that so much time has passed. May 9 is the last day for the House to consider house bills on the 2nd reading and each day there’s a new deadline until May 27, the final day. After the end of his remarks, Rep. Herrero shook hands with all present.

TARA Field Organizer Judy Bryant and Houston TARA President Cheryl Anderson spoke to the members of the International Longshoreman’s Association Retirees at their meeting held at ILA local 1351 in Houston. President Jerry Hibbeler invited them to share information about and from the Alliance for Retired Americans. Judy Bryant explained about TARA’s local,state and national actions on behalf of current and future retirees, while Cheryl Anderson told about the Houston chapter activities and invited all to join them on the first Wednesday of each month. TARA welcomes the ILA Retirees as our newest affiliate.